April is shaping up to be the cruelest month for Prime Minister Stephen Harper: the Mike Duffy trial begins this week, the knives are already out for the federal budget coming April 21, and author Michael Harris will be hitting the road to talk about his takedown of the Harper years, Party of One. Fair Vote Guelph is bringing Harris to the Royal City on April 19, but Open Sources Guelph will have the reporter, columnist and author on the show later this week.

Harris, whose day job is as a columnist for iPolitics, released Party of One last fall, almost one year from the coming Federal Election that the author so obviously hopes to have an impact on with his 500-someodd page tome. At Harcourt United Church on April 19 at 2, local politicos will not only get a chance to hear from Harris in person, but engage with him in what Fair Vote Guelph promises to be a “substantial amount of time” for a Q&A.

Bur first, Open Sources is teaming up with RadiOPIRG to interview Harris about the book, the current state of federal politics, and whether or not he thinks that Harper still has a chance for re-election this coming October. The pre-recorded interview will air uncut on Thursday April 9 at 1 pm on RadiOPIRG, and will be run again on Open Sources at 5 pm. 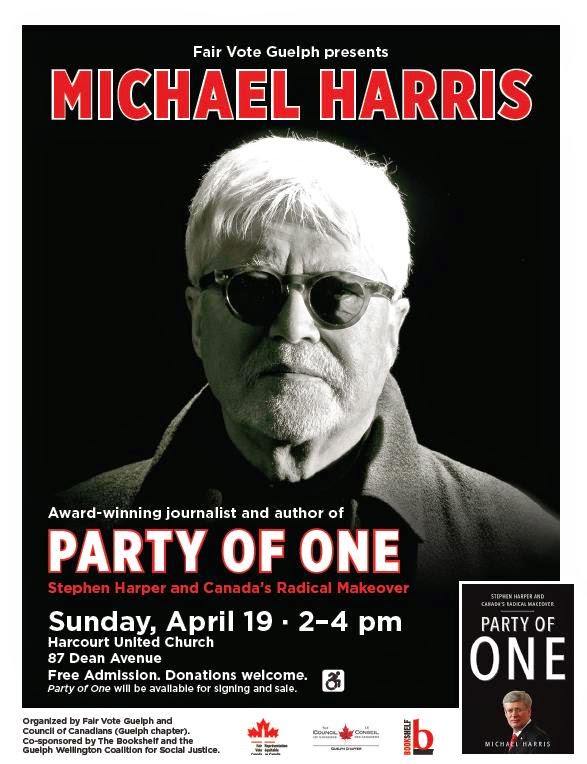 We have another public event being organized for Sunday afternoon, April 19. You may have seen some of the posters or mini-flyers already. In any case, author Michael Harris will be discussing his book,

We are planning to have some brief remarks about Proportional Representation and we are asking representatives/candidates from the local Riding Associations to speak about their views on PR. The event will include a substantial amount of time for Questions and Answers. Council of Canadians-Guelph chapter is assisting with this event and, in addition, it is being cosponsored by The Bookshelf and the Guelph-Wellington Coalition for Social Justice.

The book, Party of One, is a litany of ill-advised decisions made by Mr. Stephen Harper and the Harper Government over the past eight years. The author devotes three chapters to the Robo call Scandal. The book includes a chapter on the treatment of Veterans who have suffered physical and mental damages fighting on our behalf. The Senate Scandal is discussed at length. Several questionable tiffs with senior Civil Servants are examined.

About Party of One:

A scathing indictment of a prime minister determined to remake Canada.

In Party of One, investigative journalist Michael Harris closely examines the majority government of a prime minister essentially unchecked by the opposition and empowered by the general election victory of May 2011. Harris looks at Harper’s policies, instincts, and the often breathtaking gap between his stated political principles and his practices.

Harris argues that Harper is more than a master of controlling information: he is a profoundly anti-democratic figure. In the F-35 debacle, the government’s sin wasn’t only keeping the facts from Canadians, it was in inventing them. Harper himself provided the key confabulations, and they are irrefutably (and unapologetically) on the public record from the last election. This is no longer a matter of partisan debate, but a fact Canadians must interpret for what it may signify.

Harris illustrates how Harper has made war on every independent source of information in Canada since coming to power. Party of One is about a man with a well-defined and growing enemies list of those not wanted on the voyage: union members, scientists, diplomats, environmentalists, First Nations peoples, and journalists.

Against the backdrop of a Conservative commitment to transparency and accountability, Harris exposes the ultra-secrecy, non-compliance, and dismissiveness of this prime minister. And with the Conservative majority in Parliament, the law is simple: what one man, the PM, says, goes.