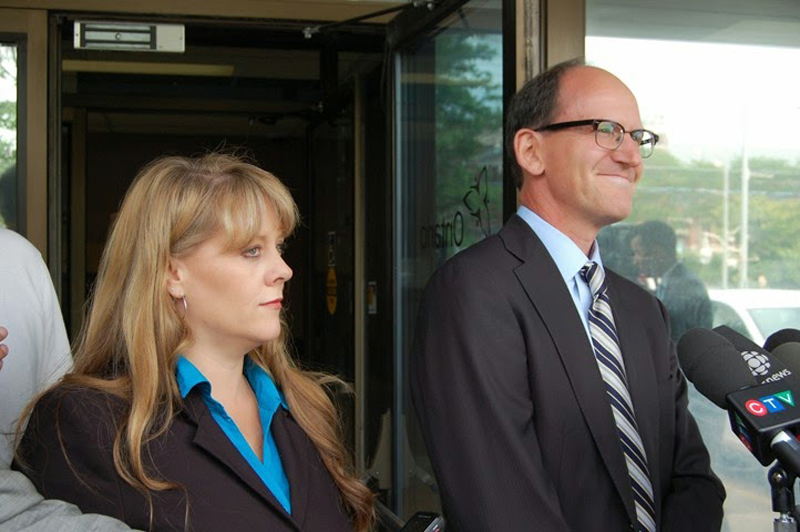 Wrapping up an odyssey that’s been in play for over three years, Michael Sona was found guilty in a Guelph courtroom this morning of “willfully preventing or endeavouring to prevent an elector from voting.”

After a summation of the trial and the facts offered into evidence, Judge Gary Hearn rendered his judgment to a packed gallery of media and observers at the provincial courthouse on Wyndham Street. Hearn said that upon consideration of the “balance of evidence” he was satisfied that Sona had aided and abetted the May 2, 2011 robocall scheme to misdirect nearly 7,000 Guelph voters to different polling stations, and “was a party to it.”

In his decision Judge Heard said that, “Sona was actively involved as the creator of the plan,” and, “while the evidence is not sufficient that Mr. Sona ‘pulled the trigger,’ he played an active role in putting the process into motion.”

The most fascinating admission in the judge’s decision though was that it was clear from the evidence that Sona wasn’t the proverbial “lone gunman” in making the robocalls, nor did the Judge Hearn name Sona as the person possessing the alias Pierre Poutine or Pierre Jones.

Hearn’s decision noted that Sona was involved in the campaign on an ongoing basis, thus putting him central in the Marty Burke office’s so-called “siege mentality” during the 2011 federal election in Guelph. It was also Sona who first raise the possibility to some kind of fraudulent robocall campaign, and he had talked to a Conservative Party strategist about the possibility. On these points Hearn said that the testimony of Sona’s fellow Burke campaign staffers Chris Crawford and John White was “candid and compelling.”

Hearn also found the Sona’s Parliament Hill co-workers compelling in their testimony, and noted that many of the broad details that they testified Sona had told them before news of the robocalls broke demonstrated that he had a knowledge that only someone involved in the scheme would have. Despite “minor differences” in testimony, which was to be expected said Hearn, the “disclosures were detailed with unique parts of the plan” to be convincing, and more than that, Hearn noted, Sona seemed proud of his actions.

Less convincing to the judge was the testimony of Andrew Prescott. Hearn wrote off bits of testimony from the so-called “Christian Conservative” and Burke campaign deputy manager, including Sona’s excited “It’s working!” utterance on the morning of the Election Day and Sona’s “toast” to Pierre during a celebration on Election Night.

Hearn noted that Prescott was “cautious in his presentation of evidence,” as if to indicate that the witness was perhaps not entirely truthful on the stand, and that much of Prescott’s “damning” testimony came in interviews after Prescott secured immunity from prosecution. Prescott’s experience in I.T. also made him suspect, as does his close relationship with both RackNine owner Matt Meier and Burke campaign manager Ken Morgan, who’s since left Canada for parts unknown.

After the reading of the verdict, the convicted Sona, who had been watching and listening to the judge intently, began keeping his head down and focusing his attention on his Blackberry. Reportedly, Sona’s parents, who were with him in court every day of the trial, left the courtroom crying when a recess was called after the verdict was read. Sona’s father returned to court after the recess, his mother did not.

Sona’s sentencing hearing will take place on October 17, 2014 at 9:30 pm. He could face a maximum penalty of five years in jail and a $5,000 fine. Proceedings are delayed as the Crown gets together a recommendation for sentencing and other reports. Sona is now the only person to ever be convicted under the Elections Act.