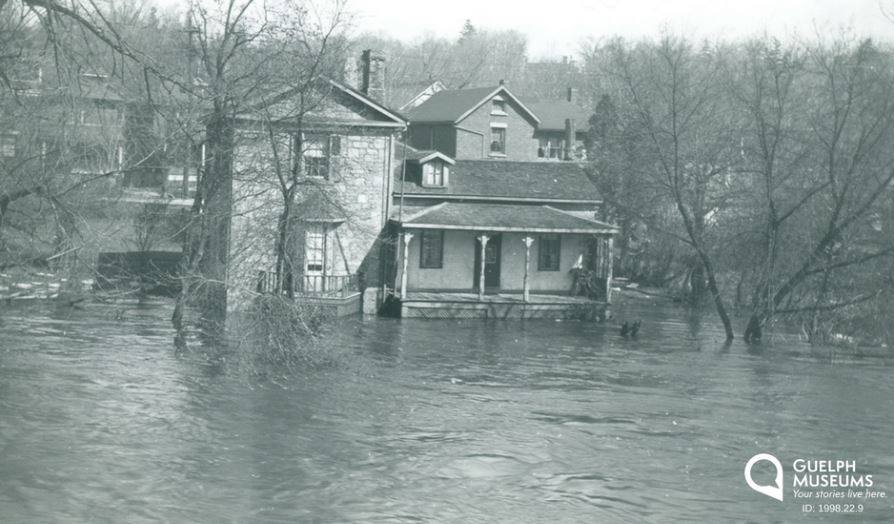 “Speed River Flood Termed Worst in 20 Years.” screamed the headline on the front of the Mercury on Saturday March 20, 1948. The last great flood of its kind happened in the Spring of 1929, but between the floods there was a World War and a Great Depression, so when the water under the Allan’s Dam reached the six-foot level, there was definitely a sense of deja vu.

Unfortunately, the microfiche for the Mercury from the first half of 1929 was unavailable, but in 1948, when the water rose again, it was City Engineer H.S. Nicklin that first mention the flood back in ’29. Riverside Park and Royal City Park were both hit hard as the Speed River swelled after heavy rain through the afternoon and evening the day before. Guelph Police and Fire had to evacuate people in neighbouring areas throughout the night, including the Swindlehurst and Bell families would woke up to find water flowing through their Gordon Street homes. On the other had, March 19 was the warmest day of 1948 till that point.

The weather had started to clear on Monday, all the better to see the effect of the massive flooding in neighbourhoods near the river. “Low lying sections of the city in the Bedford Street district took on the appearance of a summer resort lake Saturday but the element of pleasure was not there for dozens of marooned residents whose basements were flooded by the rising Speed River,” said the caption beneath a picture of the flooded Bedford St.

But it wasn’t all whimsical. Two people had died as a result of the flooding and the initial damage estimate was in the millions. A railway bridge outside Wingham was severely damaged, and it threatened to cut off the town for days until repairs could be affected. There was also railroad trouble on the line between Allandale and Collingwood when a train jumped the track Saturday, resulting in the locomotive getting buried in some 20 feet of mud that made it even more difficult than usual to dislodge a 150-ton train engine.

By Tuesday, the picture, in Guelph anyway, was much rosier. “Speed Free of Ice fro the First Time Since Last Fall,” said the headline adding, “As Sinking Water Level Returns Almost to Normal.” The Mercury reported that six families in total had to be evacuated due to the flooding of their homes, but civic leaders agreed that compared to many of their neighbours Guelph was “very lucky” in terms of fallout from the rains.

Fast-forward 26 years on May 17, 1974, a Friday, and Guelph was once again faced with another once every “20 years” storm that would wreck havoc on the city, as warm moist air from the south clashed with a cold front from the north in the skies overhead. “The result was the worst rain storm in Guelph since Hurricane Hazel struck Ontario in 1954,” read the article by Dick Brimmell. “About two inches of rain, the equivalent of an average monthly rainfall for May, fell on the Royal City in less than five hours.”

Hurricane Hazel had struck in October 1954. It plowed through Haiti were it killed over 400 people, and then hit the Carolinas and travelled north, through New York State and over Lake Ontario and hit Toronto and area causing $137.5 million in damage (or $1.3 billion in today’s money), killing 81 people, and leaving about 4,000 families homeless. “I think the situation along the [Grand] river is worse now than it was then, but it isn’t quite was bad as the floods of 1948,” said Charlie Stevens, water management engineer of the Grand River Conservation Authority.

“Darkness descended early on Guelph,” said the Mercury, as thunder and lightening started around 7:30 pm. The sudden rush of rain combined with an abnormally wet spring meant the main trunk storm sewer couldn’t handle the amount of water passing through. Basements started flooding, every pump was pressed into service by city crews, and a large section of the retaining bank on Guelph Street near Paisley turned into a mud slide that spilled out across the road. In some places, the Speed and the Eramosa rose by two-and-a-half feet. Meanwhile, lightening kept Hydro busy with power being knocked out to a few areas of Guelph.

Yet again though, Guelph seemed to have been spared the brunt. Heavy damage was taken in Cambridge as flooding along the Grand River left hundreds of people temporarily homeless, some stranded on rooftops along the downtown. One unfortunate person in particular, 45-year-old Norman Taylor, had to be rescued by helicopter after spending 10 hours in a tree to escape the flood waters. Up river in Brant and Paris, the water level got as high as 15 to 17 feet in places. Brantford Mayor Charles Bowen declared a state of emergency as the amount of water entering the reservoir had knocked the treatment plant’s pumping system off line. Police advised residents to boil water using it.

So as it rains this weekend, keep in mind that it can be worse. Especially for those of you that live close to the river.